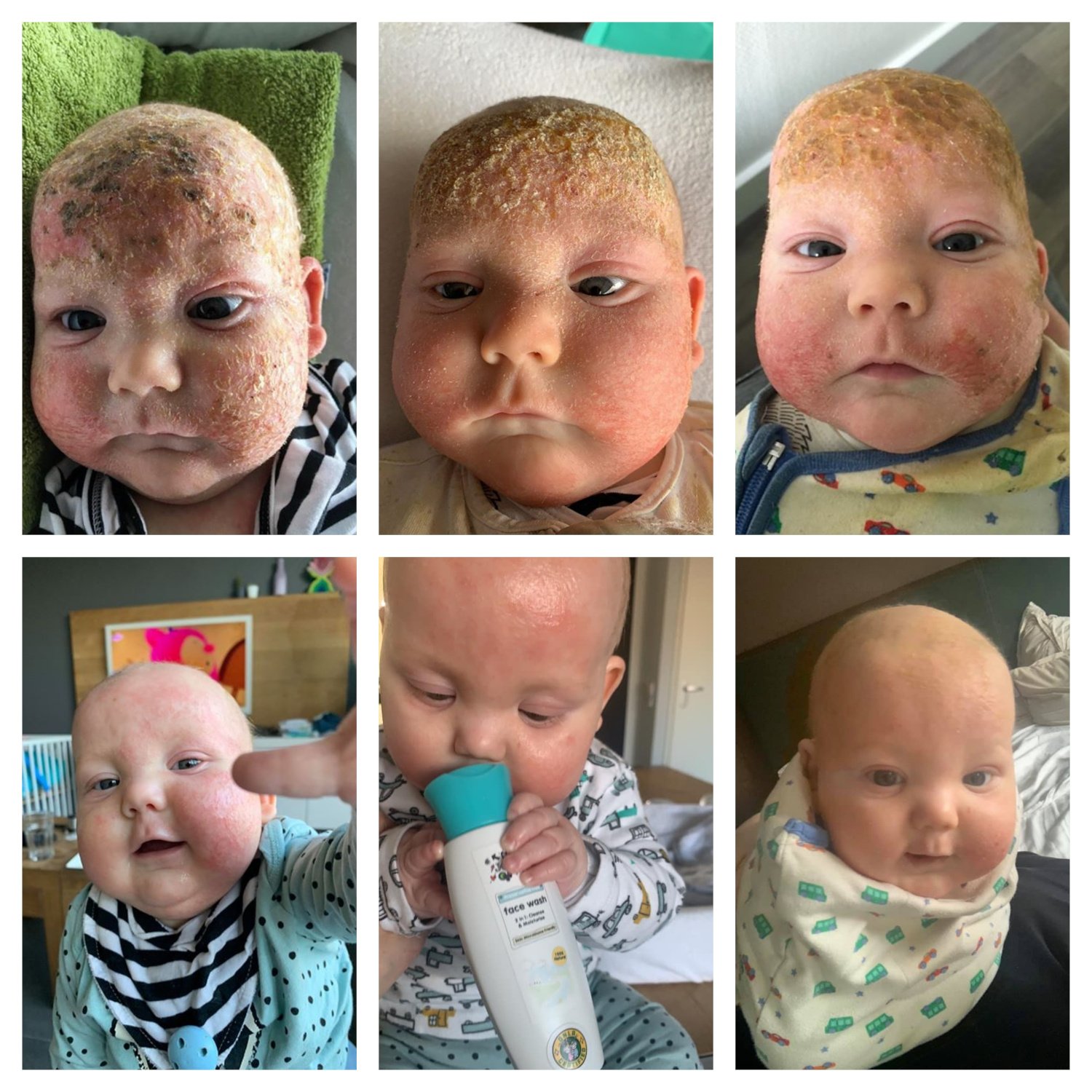 "I am so happy we found JooMo, and thankful for all the support I got."

"I am so glad they always took the time to reassure me. Super happy with his skin now."

My beautiful baby Mason was born on the 25th of June 2019, and like many babies do, he started showing symptoms of eczema from an early age (November 2019 when he was 4 months old).

However, the symptoms soon became much more severe than would normally be expected, and at 5 months old his whole face had become incredibly inflamed.

We took him to the doctor who said that he had severe eczema, and so she prescribed topical steroids for him.

"...at 5 months old his whole face had become incredibly inflamed." 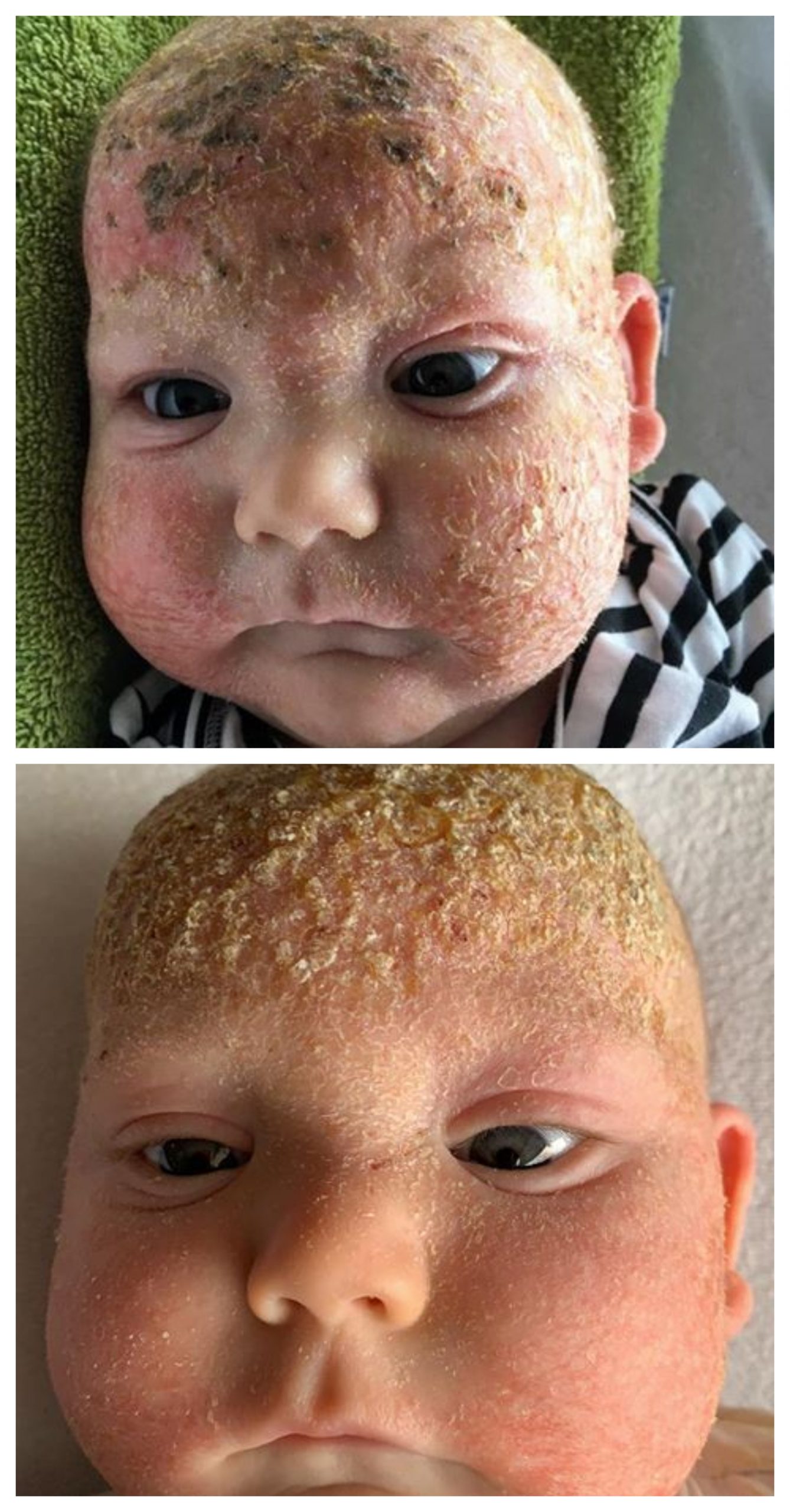 Rejecting topical steroids for my baby

I was still weaning off steroids myself. I was 3 years steroid free, having used them for 20 years, and had experienced some horrible withdrawal symptoms.

I always had severe eczema and got stronger steroids every time I visited the doctor. When I was 12 years old I got on one of the heaviest steroids. They worked, as long as I kept using them. And I used A LOT.

My baby died when I was 14 weeks pregnant but I didn’t know she died until 20 weeks. I believe it was because my body was in shock after quitting the steroids.

So I made the decision to stop using topical steroids – however, although I am now 3 years steroid free I STILL have skin flares.

"My baby died when I was 14 weeks pregnant but I didnt know she died until 20 weeks. I believe it was because my body was in shock after quitting the steroids... So I will NEVER use them on my baby."

The search for alternatives to topical steroids 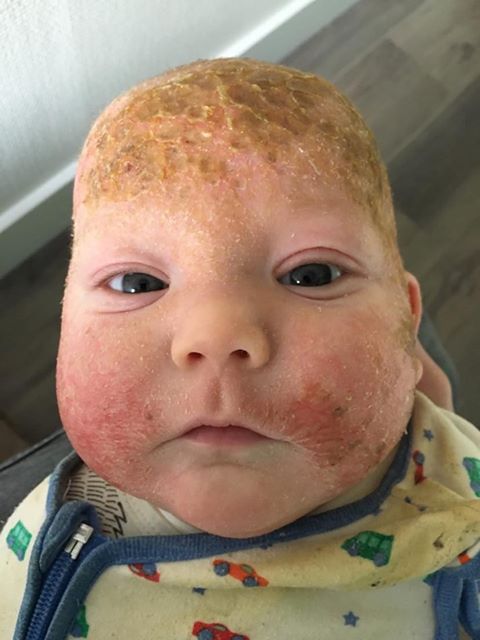 I am a member of an online Topical Steroid Withdrawal (TSW) support group, and I started reading about other sufferers who had started using the products of a company called JooMo. Their main interest was researching the skin microbiome and its crucial role in skin problems like eczema.

I was interested to read that their research and products focused on dealing with the underlying cause, not just ‘managing’ symptoms.

Following on from their research, they had created microbiome enhancing products that were completely natural and free of preservatives.

"I was interested to read that their research and products focused on dealing with the underlying cause, not just 'managing' symptoms."

I started to read more about how the skin microbiome had an incredibly important role in the majority of skin problems so I decided to give JooMo a try.

I contacted JooMo and explained to them that I didn’t ever want to use steroids on Mason’s skin, because I knew first hand how it feels when you have to come off them.

It was December 2019, and Mason was 5 months old when he started using their product, with particularly severe eczema on his cheeks and forehead. 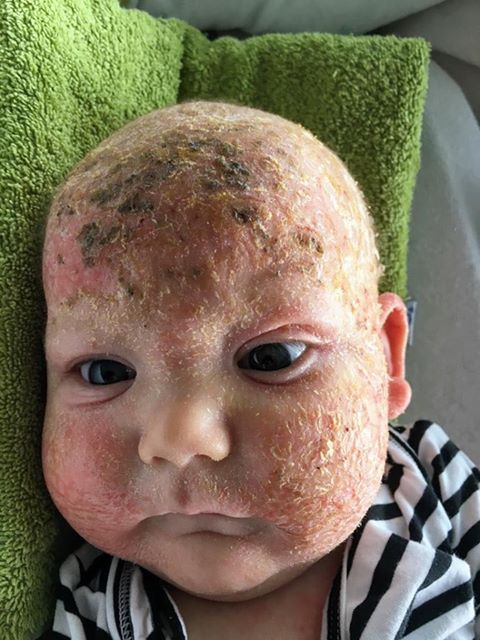 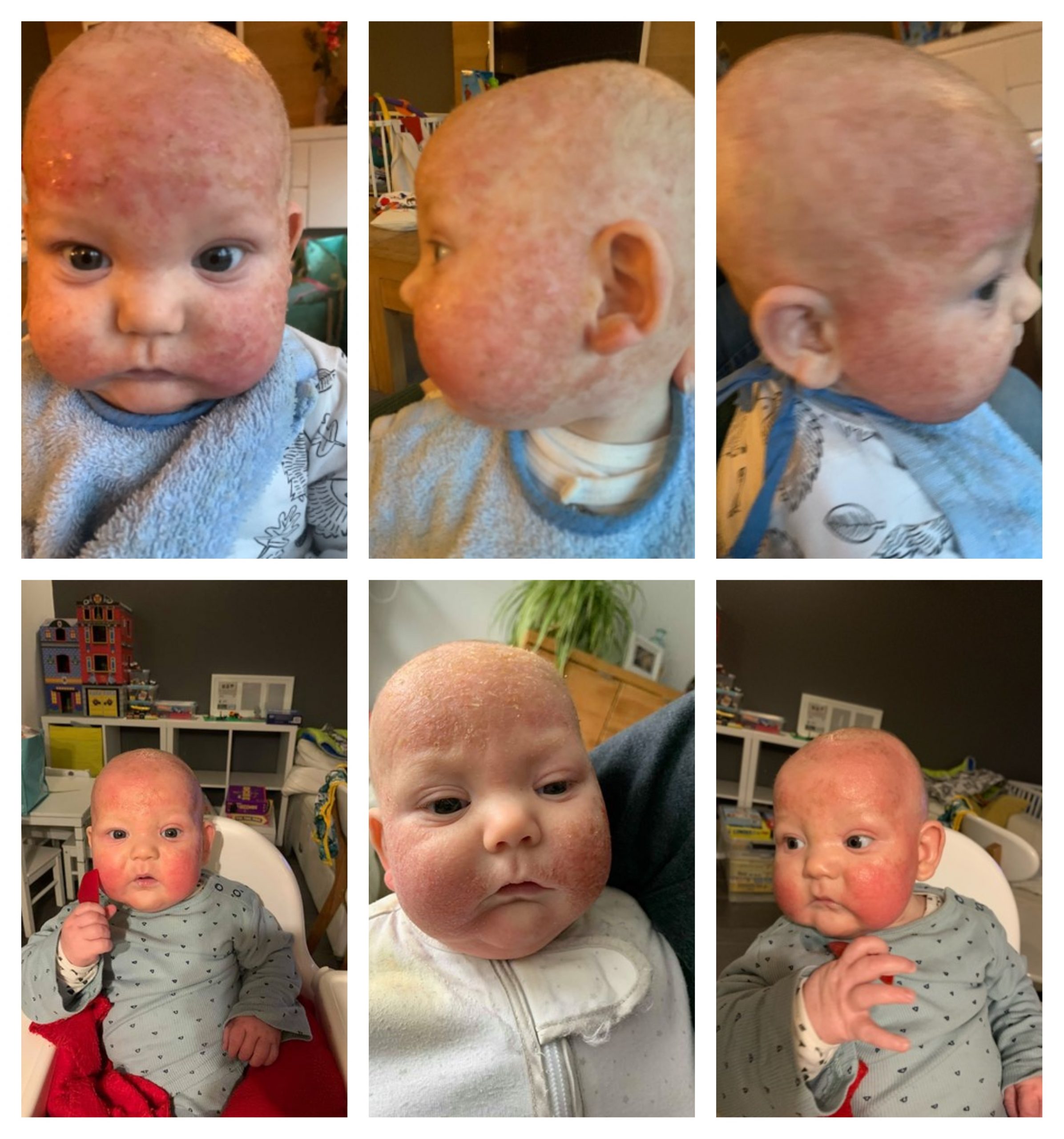 "He has his hands in an anti scratch suit. Normally, when we unzip his suit, his hands would go to his chest to scratch. Now he can play without his suit on!

The rocky road to recovery

Within the first 3 days Mason became less itchy. By day 8 I messaged JooMo:

“He has his hands in a anti scratch suit. Normally, when we unzip his suit, his hands would go to his chest to scratch. Now he can play without his suit on!

Although his skin looked really bad still, we do see improvements already! It is still red and open (oozing too) But the big scabs are gone… he is less itchy and sleeps better at night.”

Up until 1 month of the plan his skin condition and itchiness fluctuated, leaving us very frustrated. His skin improvement plateaued and even worsened when he got flu on the month mark.

In Month 2 we went to a special baby doctor and she – of course – strongly advised to start using steroids. I told her we were not going to do that, as it did so much damage to my skin. She said his skin would only get worse and wanted us to see a doctor in the hospital. She wrote a letter, letting them know we wouldn’t want to use steroids but were open for an allergy test. I couldn’t get an appointment and just continued using JooMo. I also used a new, natural cream made of oats made by a dear friend of ours – tiny Todd.

“I am so happy to finally see improvements in his skin!! We are not out of the woods yet but we are getting there!!”

There was a set-back at the end of Month 2 where he was itchy and oozing for a couple of days. In Month 3 he saw improvements!

His skin had been in a rut of improving for 2 days and then it looked horrible the next day, but at the start of Month 3 his skin stayed clear. The progress was slow and I was always cautious about being too positive for fear of jinxing it!

We went back to the doctor and she told us Mason’s growth would be compromised and his development would be delayed if we didn’t use steroids. Then she checked him and he was perfectly fine!! 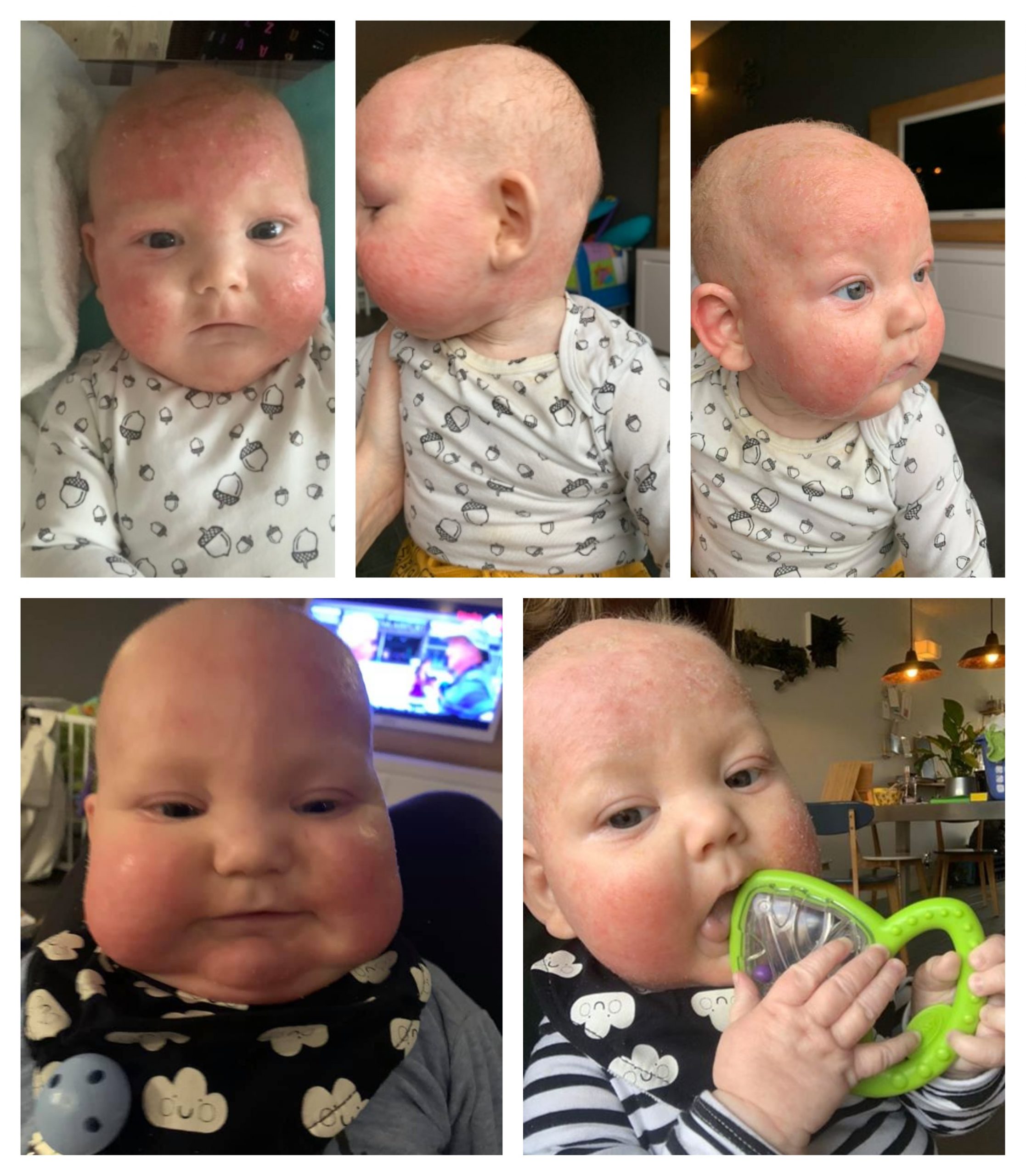 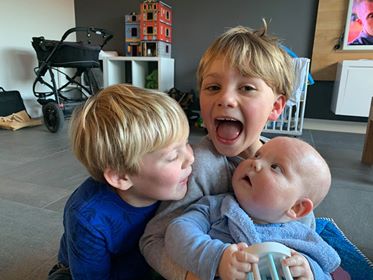 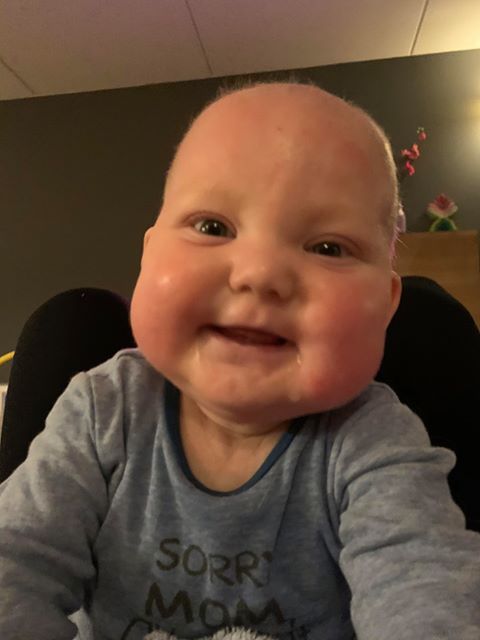 "...he can now do normal baby stuff because he isn't itchy all the time! Like playing with his big brothers and learning to eat!"

Seeing mason get his smile back makes me so proud of his dedication!

After 14 weeks of using JooMo, I sent a message to them:

“There were times I really was sad because the improvements were so small sometimes. So glad you always took the time to take the time to reassure me. Super happy with his skin now. It can only get better!”

By week 16 I was so happy because he can now do normal baby stuff because he isn’t itchy all the time! Like playing with his big brothers and learning to eat.

There is still a way to go, we will keep you updated!

If you are inspired by Mason’s skin microbiome-strengthening story, you can find out about JooMo’s products and ethos here. For anyone struggling with similar problems I really do hope you give it a try!

"Mason is now the happy little cheeky boy that I know he is!"

It’s now 5 months on from Mason finishing his initial 4 months using JooMo, and his skin has never been better. Just like every human, there are some bad days, where his skin gets a little red, but for most of the time it glows. Mason is now the happy little cheeky boy that I know he is! I am so happy that he has got his smile back!

VIDEO: The JooMo founders on the Dr Nandi show. 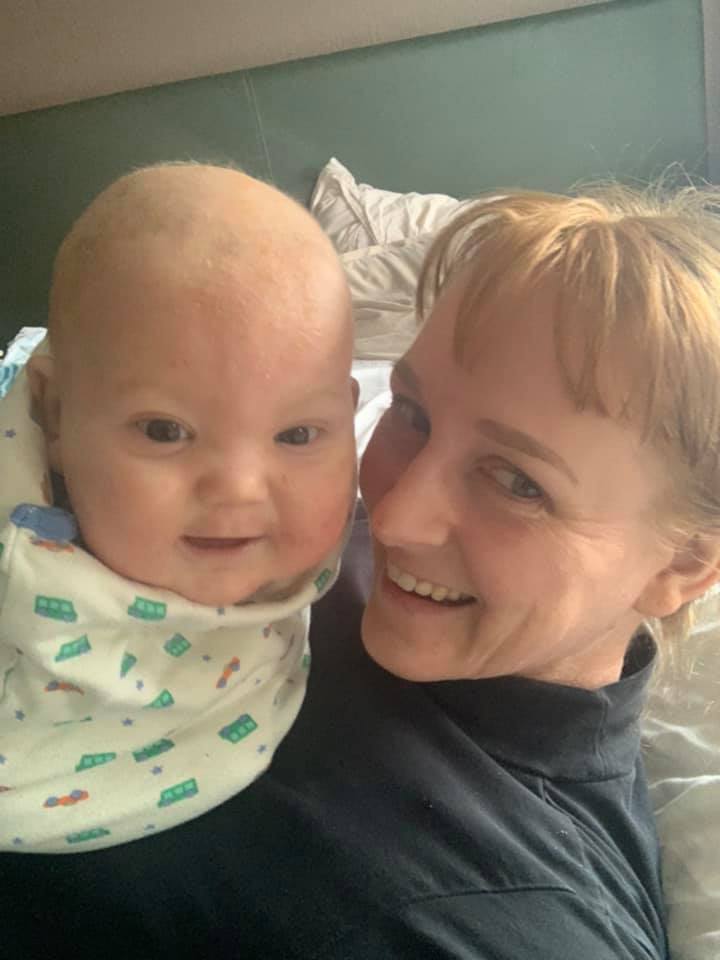 "I am so happy that he has got his smile back!"

For more information on JooMo and their products visit:  www.JooMo.coop 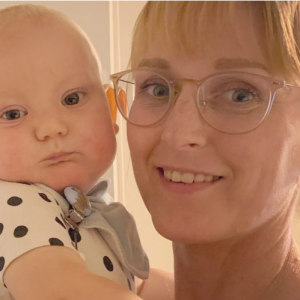 Keep up to date with my health journey!